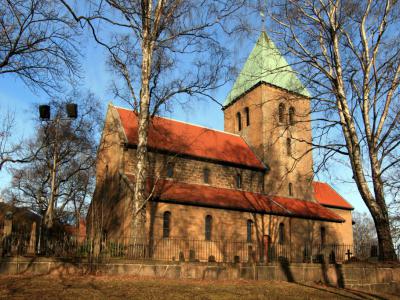 The Old Aker Church, known in Norway as Gamle Aker Kirke, is a medieval church in Oslo city centre. Still active today, it is thought to be the oldest surviving church, and possibly the oldest building of any kind, in the city of Oslo. The church was first erected by King Olav Kyrre in 1080 and has stood on this spot in some form for nearly a thousand years. It was rebuilt as a three-naved, Roman-style basilica in the 18th century. The pulpit and font, designed in the baroque style, date from 1715, while the distinctive square tower was added over a century later, in 1861.

Gamle Aker Kirke stands at the top of Telthusbakken hill, a short walk to the north of Oslo’s city centre. The church has led a troubled existence, having been pillaged and burnt down multiple times. The oldest part of the current building is a portion of the churchyard, which dates back to the 12th century. The church was built above a silver mine which was in use during Viking times. This led to many myths and legends of treasure hidden beneath the church. Regular services are still held here, and the building is free to visit throughout the year.

Tip:
With limited opening hours, if you want to view the church interior, you should check before you go.
The cemetery behind the church is also worth exploring as it is immaculately maintained.
Also visit nearby Telthusbakken, below the church. See the picturesque old wooden houses and take Kjærlighetsstien in the middle of this road.
Image by MalinMark on Flickr under Creative Commons License.