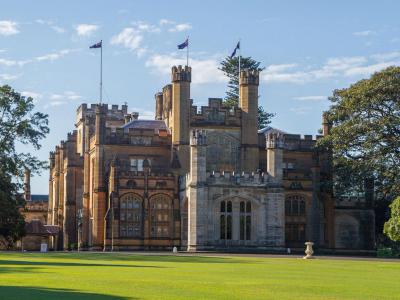 Located in 260 acres of park land, the Old Government House commands sweeping views of the Parramatta River. The building is surrounded by an undisturbed natural reserve in the midst of Australia’s biggest metropolitan area.

The Old Government House was built in 1799 and is Australia’s oldest public building. For seventy years, the house was the Governor’s rural residence. The first 10 Governors of the colony resided in the mansion. Extensions and renovations were made by Governor and Mrs. Macquarie who lived in the house from 1810 to 1821. The house became a Palladian style English mansion from a smaller and simpler structure during this time. Recently, the building has been restored and opened for visitors. The interiors have typical Anglo and Indian style furnishing, sandstone flags and a large hand cut glass chandelier that were common in fashionable houses during the 1820s.

It occupies Darug land that was home to the Burramatta Tribe. Some of the trees surrounding the house still show scars of bark stripped to make canoes by the Aborigines. It is managed by the Historic Houses Trust of New South Wales. The Trust operates tours including a haunted house tour around old Government House for tourists.
Image by Dudesleeper on Wikimedia under Creative Commons License.