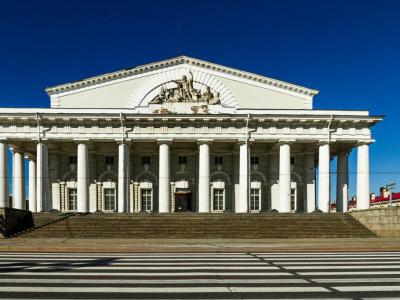 Old Saint Petersburg Stock Exchange is the main building in the architectural complex sited to fill the majestic sweep of The Spit (Russian: Strelka) of Vasilyevsky Island, just opposite the Winter Palace. A significant example of the Greek Revival architecture, it was designed by French architect Thomas de Thomon, inspired by the Greek Temple of Hera at Paestum, and was constructed between 1805 and 1810.

The institution itself was founded by edict of Peter the Great, inspired by the stock exchange in Amsterdam. The vacant space on the spit of Vasilevsky Island was developed over six years, from 1783 to 1789, to a design by Giacomo Quarenghi. A range of buildings was constructed on the shores of the Bolshaya Neva River, including the main building of the Academy of Sciences and the concave portion of the northern warehouse (1795–1797). These buildings enclosed the left and right sides of the tip of the spit, the projected location of the Stock Exchange building. Construction of the latter itself began in 1783, but was suspended in 1787. It restarted in 1805, overseen by architect Thomas de Thomon.

Thomon's design called for a peristyle of forty four Doric columns resting upon a massive stylobate of red granite and supporting an entablature of triglyphs and slotted metopes. A monumental sculptural group similar in form to a quadriga featuring Neptune, and symbolizing maritime commerce, is mounted above the portico. Both inside and outside the Bourse, a motif of the semicircle is recurrent. The interior features a large colonnaded trading hall, now divided into eight exhibition halls. The central rooms are illuminated by an oblong skylight. The surrounding ceiling features double-sunk coffers.

Originally constructed for the Stock Exchange, the building was subsequently used for a different purpose. Up until 2011, it had hosted the Central Naval Museum. Today, the municipal authorities intend to return the historic building its original mission, i.e. to host the St. Petersburg International Mercantile Exchange.
Image Courtesy of Wikimedia and Matthias Süßen.
Sight description based on Wikipedia.