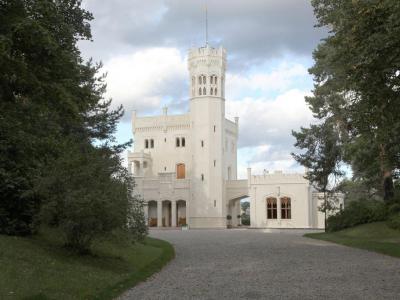 Oscarshall Castle is located on the eastern shore of Bygdøy, south west of Oslo’s city center. The first piece of land around the Oslofjord to be inhabited, Bygdøy now forms an affluent suburb of Oslo, which houses many of the city’s finest cultural attractions. The castle is owned by the Norwegian royal family, but is open to the public. It was built between 1847 and 1852. Designed by Danish architect Johan Nebelong, Oscarshall was built for Swedish king Oscar I, who lived at the castle for just five years.

One of the finest neo-Gothic works surviving in Norway, it was sold to the Norwegian state in 1863. A modest construction, Oscarshall can be seen across much of the Bygdøy peninsula, marked out by its distinctive single white tower. The castle was styled on English Romantic and neo-Gothic designs, with the interior designed and constructed entirely by Norwegian artists. The main building is surrounded by a park which stretches to the water’s edge, and an open pavilion adjacent to the fjord. The castle is open throughout the year, with guided tours available on request. The grounds can be explored free of charge as part of a day trip around Bygdøy’s many cultural attractions.
Image by Hans A. Rosbach on Wikimedia under Creative Commons License.
Sight description based on wikipedia