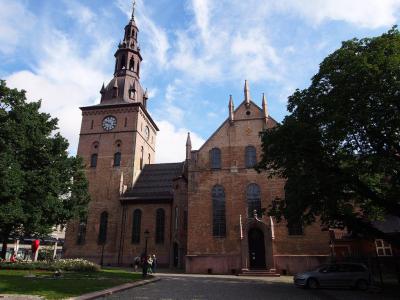 Oslo Cathedral, previously known as Our Saviour’s Church, is the current cathedral for the city, and the third in the history of Oslo. The first was built in the 12th century when the city was located slightly to the east of where it now stands. Following a great fire in 1624, the city was rebuilt around Akershus Slott. The second cathedral lasted only fifty years before another fire destroyed it. The current building, located off the Stortorvet main square, was consecrated in 1697. Rebuilt in 1850 by Chateauneuf and von Hanno, this elegant, if unassuming, neo-Gothic church was most recently restored between 2006 and 2010, and reopened with a grand Mass.

The cathedral is used by the Norwegian royal family and government for public events. It was the venue for Norway’s last royal wedding in 2001, when Haakon, Crown Prince of Norway, married Mette Tjessem Hoiby. The interior is notable for fine stained glass windows designed by Emanuel Vigeland, a silver sculpture by Arrigo Minerbi, and elaborate ceiling decoration by Norwegian painter Hugo Mohr. Home to the Bishop of Oslo, the church holds Mass each Sunday and is free to visit throughout the week. Guided group tours can also be arranged on weekdays.

Why You Should Visit:
Simple and elegant, and open for everyone. The pulpit and King's seating area are beautifully carved, and the ceiling and Last Supper bronze are very worth seeing.
Not merely a religious building but a center of culture for the whole city; in fact, you can often attend many different concerts and events during the year.