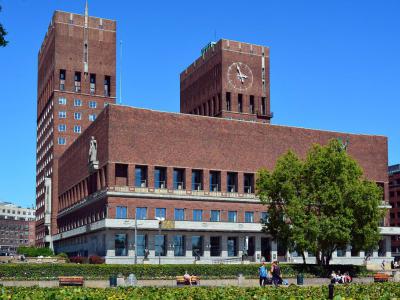 Oslo’s City Hall is located in the downtown district of Pipervika. An example of the functionalist style of the mid 20th century, it was inaugurated in 1950. It is one of Oslo’s most famous buildings and was voted the city’s ‘structure of the century’ in 2005. A red brick building marked by two industrial style oblong towers, the City Hall is famous the world over as the venue for the Nobel Peace Prize awards ceremony. Barack Obama was among the first to be honored in the banqueting hall here after the ceremony was moved from the University of Oslo’s main building.

Now a mainstay of civic life in the city, Oslo’s City Hall was nearly never completed. Construction began in 1931, but was halted by World War 2, and only finished five years after the war ended. Designed by Arnstein Arneberg and Magnus Poulsson. There have been municipal buildings dotted around Norway’s capital since the Middle Ages, and as far back as 1915, plans were put in place for the new, larger building in Pipervika. It combines modern forms and materials with some medieval flourishes, including statues mounted on the walls and an ornate astronomical clock on the north face. The eastern tower contains a 49 bell carillon which chimes across the city center at the top of each hour.

Why You Should Visit:
Very scenic place, and you can visit many of the decorated halls, as well as enjoy a wonderful view of the harbor from the main balcony.

Tip:
Make sure you spend some time reading the captions under the wood carvings as you walk up to the City Hall (they are also written in English).
Free English guided tours (approx. 1 hour) are available, with guides who bring the building to life, explaining the murals & artworks and their symbolism as well as the functioning of the city government in an entertaining way. Not to be missed!