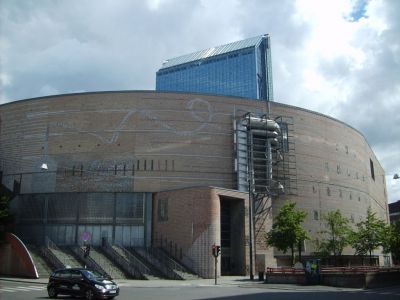 Oslo Konserthus, or Concert Hall, is one of Oslo’s, and indeed Norway’s premier cultural venues. Located in the Vika district of the city center, it is also the home of the Oslo Philharmonic Orchestra. The hall hosts over 300 events each year, meaning there is an event on almost every day. It was built as a home for the orchestra, and to provide the nation with a first class concert hall. However, as with other modern additions to the city, it took time to get off the ground – twenty two years passed between the planning stage and the hall’s grand opening.

Submissions for the design were first submitted in 1955. Ten years later, a holding company was founded, but the hall did not open until 1977. A year later, the hall’s organ was installed. Specially made in Germany, the 7000 pipe organ is the largest in the country. The hall itself holds 1600, whilst a smaller second hall can host around 250 people. A box office is also found within the hall, as well as restaurants, bars and practice rooms. A sleek, modernist stone clad building, based on Gösta Abergh’s winning design, the Konserthus has suffered criticism from the former orchestra conductor, who resigned over the hall’s alleged poor acoustics.
Image by Olve Utne on Wikimedia under Creative Commons License.
Sight description based on wikipedia