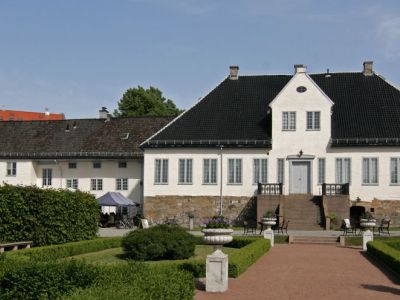 Oslo Manor House is located in Oslo’s medieval quarter. Rapid urban development in the 20th century caused the area to become neglected, with main roads cutting through it, and buildings falling into disrepair. After a major period of restoration, today the area is a popular tourist destination, with newly renovated buildings like the Manor House offering a glimpse into life in the bygone ages of Norway.

Oslo Ladegard, as it is known locally, dates from 1720. It is found in the heart of the medieval center of Oslo, at the foot of Ekeberg Hill. A baroque manor house, it was built over the cellar of the nearby Bispeborgen building. The newly restored interior features paintings, furniture and decoration from different artistic eras. In the house’s former attic, you can find scale models of Oslo in medieval times, and an exhibition on burial rites in the Middle Ages.

The manor house is open to guided group tours throughout the year, although these need to be pre-booked. Tours without reservation run during the summer season, but are carried out in Norwegian only. The grounds host an al fresco café in the summer months, as well as open air concerts on Wednesdays throughout the year.
Image Courtesy of Wikimedia and Mahlum.