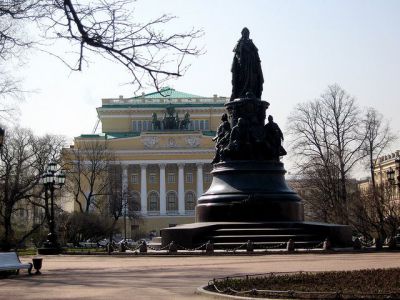 Situated at the heart of a grand architectural ensemble – linking Nevsky Prospekt to the Fontanka Embankment and embracing the Catherine Gardens, the Alexandrinsky Theatre, Architect Rossi Street (Russian: Ulitsa Zodchego Rossi) and Lomonosov Square (Ploshchad Lomonosova) – is Ostrovsky Square (Ploshchad Ostrovskogo), a beautiful creation by Italian architect Carlo Rossi. Although the elaborate plan of Rossi to produce a large urban district between Anichkov Palace and the Imperial Public Library (now the Russian National Library) was never fully realized, the area still turned out to be remarkably interesting, architecture-wise.

Another local landmark is the magnificent monument of Catherine the Great, unveiled in 1873, surrounded on both sides with the statues of her confidants and prominent public figures of her reign, such as Alexander Suvorov, Gavrila Derzhavin, Yekaterina Dashkova, Peter Rumyantsev, Ivan Betsky, Alexei Orlov, and Grigory Potemkin.

Also worth the mention is Architect Rossi Street, famous for its "golden ratio" proportions: 220 meters in length, and 22 meters in both width and height. It is the only street in St. Petersburg where only two buildings are located. One of them now houses the Theatre Museum and the famous Vaganova Ballet School.

A rare treat is to see Ostrovsky Square’s lights and decorations at night during New Year’s Eve. The annual 25-day Christmas Market, where vendors from around the world offer their wares and cuisine, is also a unique and recommended experience.
Image Courtesy of Flickr and Ed Yourdon.