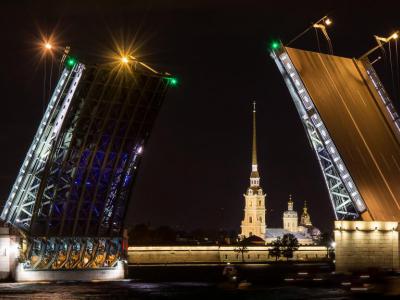 The Palace Bridge (Russian: Dvortsoviy Most) is a cast-iron road- and foot-traffic bascule overpass spanning the Neva River between Palace Square and Vasilievsky Island. Like pretty much every other Neva bridge in Saint Petersburg, it is drawn by night, making foot travel between various parts of the city virtually impossible.

The bridge was built by the French firm Société de Construction des Batignolles to the design by Andrey Pshenitsky. The construction began in 1912, but was delayed by WWI, so the bridge was not opened until 1916. The history leading up to it was tortuous with 54 proposed designs rejected between 1901 and 1911, prompted by strict measures to prevent the obstruction of view from Palace Embankment towards Kunstkammer, Imperial Academy of Arts, and other structures on Vasilievsky Island.

The bridge measures in length 260.1 meters, in width – 27.8 meters, and is actually composed of five spans, the southernmost joining Palace Embankment between the Winter Palace and the Admiralty, and leading to Palace Square. The 700-ton bridge flights are opened up by an engine consisting of motors and huge gears, some of which are still the original ones, and thousand-ton counterweights.

During the October Revolution this bridge was singled out as one of the prime locations to be seized by revolutionists in order to establish control over the city, and was taken without a single shot fired.

A year after its inauguration, the bridge was renamed Republican Bridge, but the original name was restored in 1952. Various improvements and embellishments of the structure continued well through the Soviet period. In 1967, the bridge was repaired, and in 1998 the tramway tracks were removed.

Why You Should Visit:
Looks cool in the evening, as it has a bright lilac backlighting. The raising at 1:20 AM to the music is spectacular. Nice background for a canal boat ride at night!

Tip:
Quite nice to stroll around on a leisure evening, enjoying the palace grounds or watching live performers.
Nearby shops offer good souvenirs at reasonable prices. Plenty of street vendors selling hotdogs and beverages close-by.
Image by kuhnmi on Flickr under Creative Commons License.
Sight description based on wikipedia