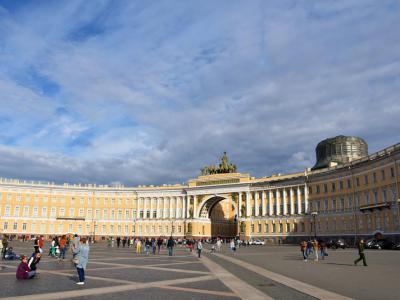 One cannot truly experience St. Petersburg without visiting Palace Square (Russian: Dvortsovaya Ploshchad), the central square of St. Petersburg. The place takes its name from the Winter Palace that frames it at one end.

The southern side of the square, formed as an arc, emerged in the late 18th century, designed by George von Velten; whereas the overall ensemble – masterminded as a vast monument to the Russian victory over Napoleonic France – came into existence under Alexander I (reigned 1801–1825).

The architect Carlo Rossi took 10 years, from 1819 to 1829, to create a bow-shaped plaza which centers on a double triumphal arch crowned with a bronze Roman quadriga. One of the most stunning architectural elements of the square is the Alexander Column designed by Auguste de Montferrand in 1830–1834. This red granite column (the tallest of its kind in the world) stands 47.5 meters high and weighs some 500 tons. It is set so well that requires no attachment to the base. The monument is topped with an angel holding a cross.

The square features a mix of architectural styles, ranging from Baroque of the white-and-turquoise Winter Palace (re-built between 1754 and 1762) to the Neoclassical Imperial-style of the General Staff Building (1819–1829). The eastern side of the square comprises Alexander Brullov's building of the Guards Corps Headquarters (1837–1843), overlooking the western side which opens towards Admiralty Square.

Many historic events took place at Palace Square over the years, including the so-called Bloody Sunday massacre of 9 January 1905, during which the Tsar’s troops gunned down hundreds of peaceful demonstrators thus giving start to the first Russian Revolution of 1905. Another revolution, of 1917, also culminated here with the storming of the Winter Palace. A signal for that attack came from the nearby moored Cruiser Aurora which fired a shot from her forecastle gun on 25 October 1917.

Why You Should Visit:
Immaculately clean square and extremely picturesque, in large part, due to the Hermitage and the Winter Palace.

Tip:
Highly photogenic, so make sure to bring a good camera and come early in the morning when the sun rises behind the General Staff Building, casting nice shadows over the horse-drawn chariot on top of it.
A 20-minute horse ride (not expensive) can give you a special dimension to visiting the place.
Image by Richard Mortel on Flickr under Creative Commons License.
Sight description based on wikipedia