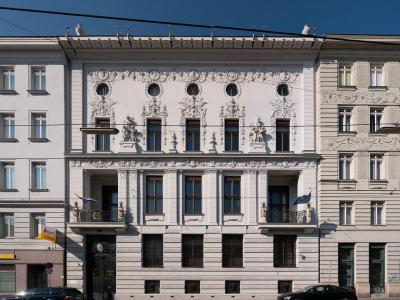 When Otto Wagner built himself a "town house" at Rennweg 3 in the 1890s, it was clearly still a desirable residence. Now known as the Palais Hoyos and occupied by the Croatian embassy, this early Wagner work is very much in the Ringstrasse style, with its elaborate wrought-iron balconies and stucco decorations, but you can discern hints of his later work in touches such as the projecting cornice and the very ﬁne reliefs on the upper ﬂoor. Wagner also designed the houses on either side, including no. 5, where the composer Gustav Mahler lived from 1898 to 1909.

Close by, on Rennweg, stands the Gardekirche, completed by Nicolò Pacassi (Maria Theresa's court architect) in the 1760s, but refaced in a Neoclassical style just six years later. The Rococo interior, however, was left alone, and still retains its richly gilded stuccowork, ribbed dome, bull's-eye windows and lantern. Built as the chapel of the imperial hospital, it was handed over to the Polish Guards in 1782, holds services in Polish and is popularly known as the Polnische Kirche.
Image Courtesy of Wikimedia and Thomas Ledl.