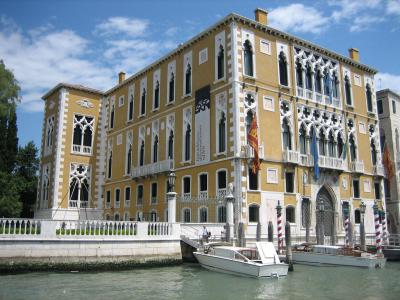 Situated opposite the Accademia gallery, next to the Palazzo Barbarigo, this palace is quite simply one of the most beautiful along the Grand Canal, lavishly adorned with Gothic tracery and a large, beautifully tended garden. Built in the 16th century, it represents a stunning mix of Gothic and Byzantine influences, and today accommodates headquarters of the Venetian Institute of Science, Letters and Art.

In the course of centuries, the palazzo changed hands many times during which it was internally modernized and externally decorated in the Venetian Gothic style with its signature rich window framing. The first round of neo-Gothic renovation took place in 1840 – by the young Archduke of Austria, Frederick Ferdinand, who embarked on this complex project in a bid to make the Hapsburg presence in Venice more prominent. The Archduke lived in the palace until 1878, after which it was sold to Baron Raimondo Franchetti who also undertook renovation, but never actually made the palace his personal residence.

The edifice now serves multiple purposes but is mainly dedicated to hosting changing exhibitions of contemporary art which, in turn, give it a breath of fresh air amid the massive dominance of the Renaissance art all around. Each room within the palace is fitted with Murano glass chandeliers, some of which are quite monumental.

Tip:
Apart from the art and the unbeatable views of the Grand Canal, visitors to the palace can also enjoy a pretty on-site cafeteria with a fairly good lunch menu!