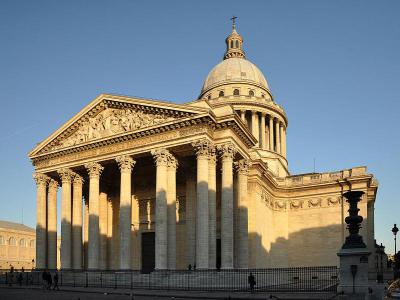 The Panthéon is a building in the Latin Quarter in Paris, combining its liturgical function with its role of being a burial place for famous historical Frenchmen such as Voltaire, Rousseau, Hugo, Braille, Dumas, and Zola. In 1995 the first female resident – two-time Nobel Prize winner Marie Curie – entered the frame.

In 1744, King Louis XV of France suffered from a serious illness and vowed to replace the old church of the Abbey of St Genevieve if he recovered. He did recover and entrusted the Marquis of Marigny with the fulfillment of his vow. In 1755, Marigny commissioned Jacques-Germain Soufflot to design the church, with construction beginning two years later. It is an early example of neoclassicism, with a façade modeled on the Pantheon in Rome, surmounted by a dome that owes some of its character to Bramante's "Tempietto". Soufflot had the intention of combining the lightness and brightness of the gothic cathedral with classical principles, but its role as a mausoleum required the great Gothic windows to be blocked. Nevertheless, it is one of the most important architectural achievements of its time and the first great neoclassical monument.

Inside the domed structure are elegant Greek columns, 19th-century murals and steep spiral stairs leading to a reproduction of the Foucault pendulum (a massive device that accurately demonstrated the Earth's rotation of the earth) suspended from a cupola.