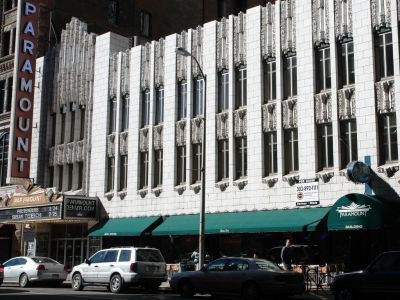 The Paramount Theatre is a concert venue in Denver, Colorado, located on Glenarm Place, near Denver's famous 16th Street Mall. The venue is a popular destination for large acts looking for a smaller concert setting. With spelling as Paramount Theater, the building was listed on the National Register of Historic Places in 1980.

The Paramount opened in 1930 as a movie theatre, part of the Paramount-Publix Theatre Circuit, the exhibition arm of Paramount Pictures. For several decades the Paramount enjoyed success as one of the premier movie houses in the Rocky Mountain region. Then, like other large movie theatres, its patronage declined as population and commerce dispersed into new suburban areas. By 1978, it was the last movie palace left in Denver, and started hosting opera with a production of Madama Butterfly in October 1978 by the Denver Opera Company. The venue has survived and evolved, and now plays host to numerous concert and performance acts.

The Paramount also hosts one of two remaining twin-console Wurlitzer theatre organs in the United States. (The other one is located in New York City, at Radio City Music Hall.) With four manuals and twenty ranks, and over 1600 pipes, the Paramount's instrument is one of the largest ever installed in the Rocky Mountain region.
Image by Hustvedt on Wikimedia under Creative Commons License.
Sight description based on wikipedia