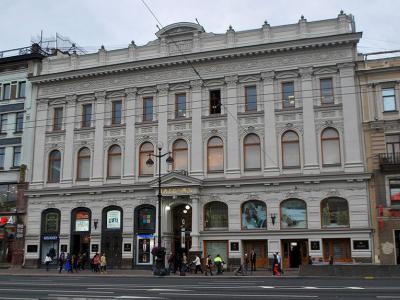 The Passazh (from the French word “passage”) is an elite department store on Nevsky Prospekt. Historically, this site had been devoted to trade since the city's foundation in the early 18th century. It had been occupied by various shops and warehouses until 1846 when Count Essen-Stenbock-Fermor acquired the grounds to build an elite shopping mall for the highest echelons of the Russian nobility and bourgeoisie.

The name came from a vast gallery between Nevsky Prospekt and Italianskaya Street which provided the main passage through the mall. The gallery was covered over by an arching glass and steel roof, thus giving it a claim to being one of the world's first shopping malls.

The Passage opened its doors to consumers on May 9, 1848. It was one of the first structures in Russia to employ gas for lighting. Another innovation was an underground floor, where an electric station would be installed in 1900.

After the Russian Revolution of 1917, the store reopened as the Passage Supermarket in 1922. It remained a showcase of the Soviet retail industry until the onset of World War II. During the Siege of Leningrad, the building's glass roof was intensively bombed, but remarkably the interior sustained little damage. The Passage was restored and reopened for business in 1947. Since 1961, it has been specializing in goods for women.

The store is now privately owned and the building has been renovated to meet modern standards. Apart from the expanded showrooms of international department stores, it houses an upscale food market in the basement, offering a wide variety of international produce. There's also a restaurant on the upper floor with a panoramic view of Nevsky Prospekt. Furthermore, the premises – also long associated with the entertainment industry – are still home to the Komissarzhevskaya Theatre.
Image Courtesy of Wikimedia and Olia Max.
Sight description based on Wikipedia.