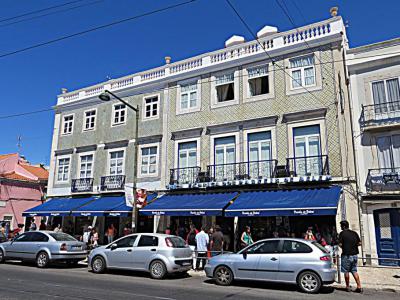 During Portuguese medieval history, Portugal's convents and monasteries produced large quantities of eggs, whose egg-whites were in demand for starching of clothes (such as nuns' habits) and also in wineries (for the clearing of wines, such as Porto). It was quite common for these monasteries and convents to produce many confections with the leftover egg yolks, resulting in a proliferation of sweet pastry recipes throughout the country, including 'pastéis de nata' – the iconic cream-filled little pies thought to be originally created before the 18th century by Catholic monks at the Jerónimos Monastery.

Following the expulsion of religious orders, and later the closing of many religious establishments in the aftermath of the 1820 Liberal Revolution, the production of 'pastéis de nata' passed to the Casa Pastéis de Belém nearby. It was this association with the parish of Santa Maria de Belém that resulted in its popular name: Pastéis de Belém. In order to keep producing the secret and distinct recipe, the former religious clerics patented and registered the confection, while contracting the Antiga Confeiteira de Belém, Lda. to produce the pastries. The secret was transmitted to five master pastry chefs who guarded the original recipe under the Oficina do Segredo, and later passed to familial descendants.

Since 1837, locals and visitors to Lisbon have visited the bakery to purchase fresh-from-the-oven pastéis, sprinkled with cinnamon and powdered sugar. Their popularity and affordability normally result in long lines, so instead of queueing for a table, you might as well take the standing option at the bar or order to go (separate line; 4/6/10/12 pieces). With its original furniture and charming old-world style, the location is outstanding, so you might want to come early to enjoy it in peace.