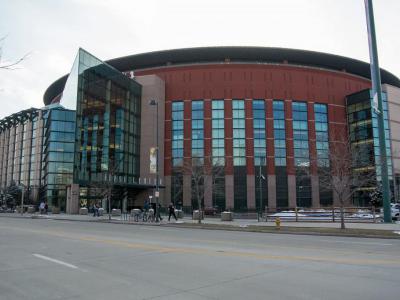 The Pepsi Center (aka The Can) is a multi-purpose arena. The building is home to the Colorado Avalanche of the National Hockey League, the Denver Nuggets of the National Basketball Association, and the Colorado Mammoth of the National Lacrosse League. When not in use by one of Denver's sports teams, the building frequently serves as a concert venue. The Pepsi Center was constructed as part of a large six-year sporting venue upgrade in Denver along with Coors Field, home of the Colorado Rockies, and Invesco Field, home of the Denver Broncos. The complex was constructed to be readily accessible. The arena is situated at Speer Boulevard, a main thoroughfare in downtown Denver, and is served by a nearby exit off Interstate 25. A light rail station is on the western side of the complex. Ground was broken for the arena on November 20, 1997, on the 4.6-acre site. Its completion in October 1999 was marked by a Celine Dion concert.
Image by mark6mauno on Wikimedia under Creative Commons License.
Sight description based on wikipedia