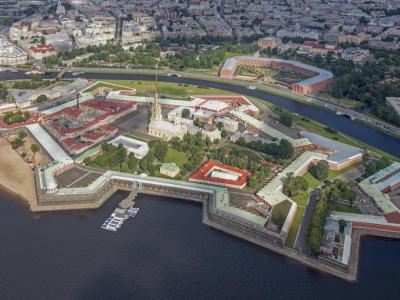 Up until the early 1920s, the Peter and Paul Fortress served as a prison for political criminals. During the February Revolution of 1917, it was attacked by mutinous soldiers of the Pavlovsky Regiment and the prisoners were freed.

On October 25, the fortress quickly fell into Bolshevik hands. Following the ultimatum from the Petrograd Soviet to the Provisional Government in the Winter Palace, after the blank salvo of the Cruiser Aurora at 21:00, the Fortress guns fired 30 or so shells at the Palace. Just two of them hit, inflicting only minor damage. At 02:10 on the morning of October 26, the Winter Palace was stormed by forces led by Vladimir Antonov-Ovseenko; the captured ministers were taken to the Fortress as prisoners.

In the years before and after the 1917 Revolution, Peter and Paul Fortress was portrayed by Bolshevik propaganda as a hellish, torturous place, where thousands of prisoners suffered endlessly in filthy, cramped, and grossly overcrowded dungeons amid frequent torture and malnutrition. In reality, conditions in the Fortress were far less brutal than believed; no more than 100 prisoners were ever kept here at a time, and most of them had access to such luxuries as tobacco, writing paper, and literature (including subversive books such as Karl Marx's Das Kapital). Despite their ultimate falsehood, stories about the prison were vital to the spread of Bolshevik revolutionary sentiment.

In 1924, most of the site was converted to a museum. Today it has been adapted as the central and most important part of the State Museum of Saint Petersburg History. The museum has gradually become virtually the sole owner of the fortress complex, except the building occupied by the Saint Petersburg Mint (Monetniy Dvor).

According to a centuries-old tradition, a cannon is fired each noon from the Naryshkin Bastion. The honorary right to make a traditional midday shot is sometimes given to honorary residents and famous guests of the city.
Image Courtesy of Wikimedia and Andrew Shiva / CC BY-SA 4.0.
Sight description based on Wikipedia.