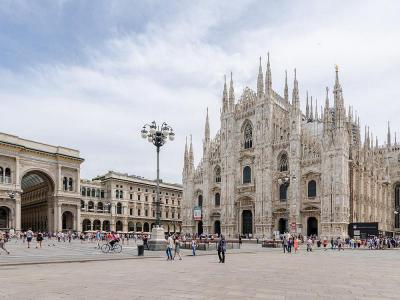 Piazza del Duomo ("Cathedral Square") is the main city square of Milan which is named after and dominated by the Milan Cathedral (Duomo). The square marks the center of the city in terms of both, geography and social gathering. Rectangular in shape, it covers an area of 17,000 m2 (about 183,000 sq ft), and houses some of the most important sights in Milan, prestigious commercial outlets, all of which makes it a foremost tourist attraction.

Originally built in the 14th century, the square had gradually developed along with the Duomo before it assumed the current form in the second half of the 19th century, courtesy of architect Giuseppe Mengoni. All the monumental buildings lining the square, with the exception of the Duomo itself and the Royal Palace, are of Mengoni's design; the most notable of them is the Galleria Vittorio Emanuele II arcade.

In 1896, the statue of Victor Emmanuel II, who was the first king of the united Italy, was inaugurated in the center of the square. This marked the completion of the restructuring initiated by the city authorities in 1860.

The last major change to the square occurred during the Fascist era, when the Arengario was built in the place where Mengoni had planned to create a second triumph arch, opposite across the square to the Galleria. The Arengario had the main purpose of letting Benito Mussolini make speeches to the crowd; it now houses a museum on 20th century art.
Image by Steffen Schmitz on Wikimedia under Creative Commons License.
Sight description based on wikipedia