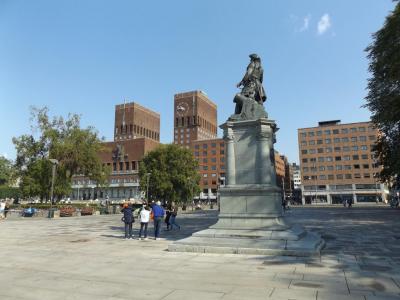 Pipervika is a popular neighborhood in Oslo, linking Aker Brygge to Akershus Fortress. Besides the historic buildings and beautiful view from the bay, you can also take a ferry to the Bygdøy peninsula, which takes about 20 minutes round-trip. Today the term Pipervika is primarily used for the bay between the fortress and Aker Brygge. This was formerly commonly known as Piperviksbukta. It is part of the Fjord City urban renewal project.The first element is assumed to refer to the brigade music's pipers (flutists) who were located in the area, the last element is the finite form of vik f 'bay, inlet'. But the Norse name of the bay was Gyljandi, and this name is derived from the verb gylja 'howl, huut' (probably referring to the windy conditions in the bay). The name Pipervika ('the piping bay') could therefore be some kind of translation from Norse to Danish in the 17th century. (The verb pipe in Scandinavian in often used to describe the sound of strong wind.)
Image by Grzegorz Wysocki on Wikimedia under Creative Commons License.
Sight description based on wikipedia