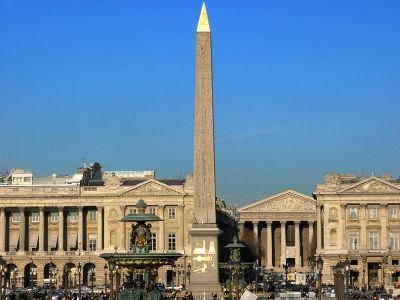 Place de la Concorde is a major public square in Paris; in fact, the largest and the most monumental of all squares in the city. It is best known for its 230-ton Egyptian obelisk, aged over 3,000 years, which makes it by far the most ancient monument in Paris. The obelisk is flanked on the sides with two magnificent fountains – the “Maritime Fountain” and the “Fountain of the Rivers” – built in 1836 and recently restored to their original exuberance. Respectively, they symbolize French seagoing spirit and passion for inland navigation. In continuation of the nautical theme, there are 20 rostral columns throughout the square adorned with a ship prow which is part of the official Paris emblem.

Designed initially to glorify the absolute power of monarchs, at some point the square became the theater of its downfall. The equestrian statue of King Louis XVI, that once stood in its center, was torn down during the French Revolution, upon which the square was renamed "Place de la Révolution." Instead of the monument, the new revolutionary government installed there a guillotine, the first “client” of which became none other than the King himself. Among other notables who shared his fate there later on, in front of the cheering crowd, were Queen Marie Antoinette, Princess Élisabeth of France, and Maximilien Robespierre.

The guillotine remained quite busy throughout the "Reign of Terror" in the summer of 1794, when in a single month more than 1,300 people were executed. A year later, when the revolution took a more moderate course, it was removed.

Today, major avenues converge and pass through Place de la Concorde so vehicle traffic can always be expected; however, the roundabout with the three important monuments – obelisk and fountains – is well worth viewing. The square is sometimes used for large scale events and festivals like Christmas markets and other festival activities.

Today, Concorde Square is a popular tourist spot, ideal for photos; conveniently located to fan out from to just about any major attraction in Paris. All the main avenues of the French capital either converge at or pass through this square, making it a somewhat traffic-dense roundabout at times. The square regularly hosts public events, Christmas fairs, and festivals.

Tip:
In the square, there is a big Ferris wheel for those keen on getting a bird's eye view over the nearby river Seine, Louvre, Tuileries Garden, Champs-Élysées, Triumphal Arch, and the Eiffel Tower. This wheel turns three times faster than the London Eye, actually, and is much cheaper too!
Image Courtesy of Wikimedia and Eric Pouhier.