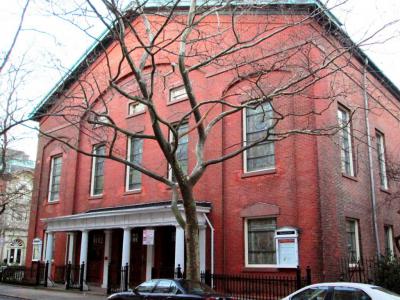 Plymouth Church is an historic church is located in the Brooklyn Heights neighborhood of Brooklyn. The church was built in 1849–50 and was designed by Joseph C. Wells. Under the leadership of its first minister, Henry Ward Beecher, it became the foremost center of anti-slavery sentiment in the mid-19th century. It has been listed on the National Register of Historic Places since 1961, and has been a National Historic Landmark since 1966. It is part of the Brooklyn Heights Historic District, created by the New York City Landmarks Preservation Commission in 1965.

Plymouth Church was founded in 1847 by 21 transplanted New Englanders, who were part of a circle centered around the wealthy evangelical merchants Arthur and Lewis Tappan. The site where the church building would be located was purchased from the First Presbyterian Church, which had been worshipping there since 1822, but which needed more space. It moved to a new site on Henry Street, a few blocks away.

Plymouth Church's first pastor was Henry Ward Beecher, who became a leading figure in the abolitionist movement. His sister was Harriet Beecher Stowe, noted today as the author of the anti-slavery novel Uncle Tom's Cabin. The church itself became an important station on the Underground Railroad through which slaves from the South were secretly transported to Canada. Locally known as "the Grand Central Depot," slaves were hidden in the tunnel-like basement beneath the church sanctuary.

In October 1859, the church offered Abraham Lincoln $200 for coming to Brooklyn and giving a lecture to the congregation. Lincoln accepted the invitation, traveled to Brooklyn and participate in church service on Sunday, February 26. Today a plaque marks the pew where Lincoln attended the service. Lincoln gave his famous anti-slavery speech before a capacity crowd of 1,500 on February 27, 1860, more than eight months before he was elected President.

Built in 1849–50, Plymouth Church is an example of 19th century urban tabernacle architecture with Italianate and colonial motifs. Its layout, influenced by the Broadway Tabernacle in Manhattan, was designed by Joseph C. Wells – who was later one of the founders of the American Institute of Architects. The barn-like church building, with its pews arranged in an arc before the pulpit, resemble more an auditorium or theater than what had traditionally been considered a church. This open design was adopted by many evangelical Protestant churches throughout the United States in the second half of the 19th century.
Image Courtesy of Wikimedia and Beyond My Ken.
Sight description based on Wikipedia.