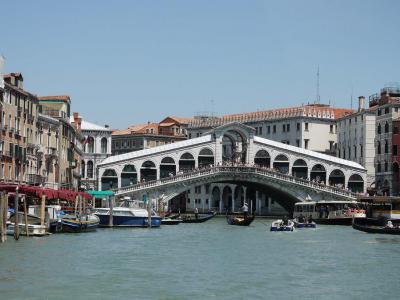 There are only four bridges in Venice spanning the Grand Canal and, if you’re exploring the city on foot, you will find yourself crossing at least one of them sooner or later. Ponte di Rialto is the oldest and certainly the most famous of the four, linking the Eastern and Western quarters of Venice – the districts of San Marco and San Polo.

It was originally built of wood in the 12th century, followed by the current stone modification four centuries later. The engineering solution seemed so audacious at the time that certain architects predicted its future ruin. However, the bridge has defied critics to become one of the architectural marvels of Venice which, until 1854, remained the only foot crossing of the Grand Canal before the Accademia bridge was erected.

And if you’re comfortable steering through the hordes of tourists crawling over the bridge, you may enjoy the spectacular views of the canal opening in both directions. Beyond the souvenir stalls are the centuries-old markets that traditionally showcase the abundance of fruits and vegetables harvested on the lagoon islands, as well as the fish freshly caught in the bordering Adriatic Sea – you can even see boats from the Burano and Pellestrina islands unloading their daily catch here.

There are plenty of shops and restaurants within the Rialto bridge area as well, usually overpriced, but masterly tucked in so as not to disturb the heritage exterior. Also by the bridge are waterbus stops, not to mention persuasive gondoliers who just happen to have a vacant gondola with your name on it, in case you're in for a boat ride.

Tip:
Evening is by far the best time to visit – much quieter and looks stunning.
Image by Richard, enjoy my life! on Flickr under Creative Commons License.