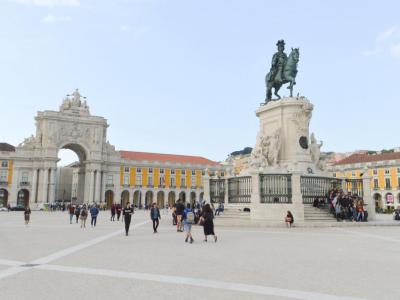 Lisbon's waterfront Praça do Comércio was completely rebuilt after the devastating 1755 earthquake and subsequent tsunami (a small description of which was written by Voltaire in 1756 and can be found in his "Poème sur le désastre de Lisbonne"), meaning that its overall layout that has been progressing throughout centuries was razed to the ground and its new symmetrical buildings were filled with government bureaus regulating customs and port activities (hence, "comércio").

The centerpiece of the 35,000 sqm square, the equestrian statue of King José I, on whose watch the earthquake happened and whose efforts initiated the city's massive rebuilding, is very interesting. Note an elephant on the eastern side of the pedestal – a symbol of the great overseas Portuguese empire, also featured in the 2008 novel, "The Elephant's Journey", by the greatest Portuguese modern writer José Saramago, winner of the Nobel Prize in Literature. A stylized elephant footprint can be seen today at the José Saramago Foundation, less than 5 minutes' walk from Praça do Comércio.

At the square's northern side, Arco da Rua Augusta – a triumphal arch linking the square with Rua Augusta – should not be missed; also, the Cais das Colunas, a small riverfront pier with two columns, or pillars, and marble steps, usually half-covered by water, that served as the "noble entrance" into the city, and through which kings, queens, heads of state and other official "celebrities" arrived during Portugal's maritime era, definitely merits a quick stop.

At the western side, the corner of Praça do Comércio and Rua do Arsenal, look up to discover a plaque commemorating the assassination of Carlos I, the then 44-year-old King of Portugal, who was shot at that spot, together with his 20-year-old heir apparent (Luís Filipe), by two assassins calling for a republican government. King Carlos I was succeeded by his other son, Manuel II, who would rule for only two years before the whole family was exiled and the monarchy jettisoned.

Of course, all around the vast and spacious square, under the arcades, there are souvenir shops, cafés, restaurants, wine cellars, etc., where tourists and locals alike come to enjoy a meal, watch ships sail by, look downstream at the 25 de Abril Bridge, or just get some air away from the sometimes cramped lanes and alleyways.

Tip:
Images of the pre-1775 square can be found through reproductions of the contemporary engravings from the 17th and 18th centuries, and on the modern ceramic tile mural ("azulejos") at the Miradouro de Santa Luzia, in Alfama.
Image by Francisco Anzola on Flickr under Creative Commons License.