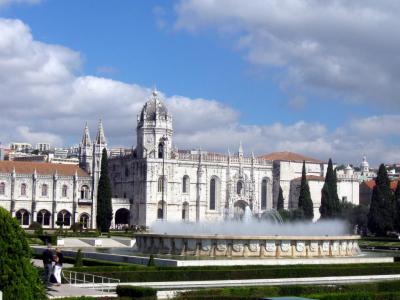 Praça do Império (Empire Square) is a city square and park situated to the south of the Monastery of Santa Maria de Belém and west of the Centro Cultural de Belém.

Between 23 June and 2 December 1940, Lisbon hosted the Exposição do Mundo Português (Portuguese World Exposition) which implied, among other efforts, an urbanization plan for Belém area and Praça do Império in particular, previously known as "Praia do Restelo".

The rectangular 175×175 meters (574×574 ft) square consists of successive quadrangles, that structure the space into passages and green spaces. These converge in the central illuminated fountain on a square platform, covering an area of 3,300 square meters (36,000 sq ft). On the extreme edges of the southern part of the square, along the Avenida da Índia, there are hippocamp statues (seahorses), over reflecting pools.

The seahorse sculptures were created by António Duarte. The Palácio do Ultramar (Overseas Palace), on the eastern edge of the park, designed by architects Cristino da Silva and Jacques Carlu, was begun in 1952. In 1973, a commemorative monument to the poet Augusto Gil (1873-1929), featuring a bronze medallion and inscription by the municipal council of Lisbon, was installed.

Outside the central fountain there are coats of arms belonging or attributed to navigators during the period of the Discoveries. The gardens feature 30 floral coats of arms representing 18 Portuguese districts, archipelagos and former colonies, complete with the crosses of Christ and Avis. There is also a national emblem, made with boxwood and flowers.

Plans to remove the floral coats of arms, in 2016, were heavily criticized by the local public and politicians, and therefore abandoned.

Tip:
On a hot summer day, hang out by the fountain and let the wind give you a refreshing shower.
Image Courtesy of Flickr and Erik Cleves Kristensen.
Sight description based on Wikipedia.