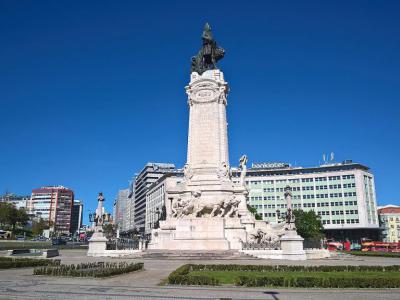 The Marquess of Pombal Square is an important roundabout in the city of Lisbon, Portugal. It is located between the Avenida da Liberdade and the Eduardo VII Park.

The square is the radiating point for various important avenues: Liberdade, Duque de Loulé and Fontes Pereira de Melo, as well as the streets Braamcamp and Joaquim António de Aguiar.

Its name is a reference to Sebastião José de Carvalho e Melo, 1st Marquess of Pombal, 1st Count of Oeiras, the mighty prime-minister who ruled Portugal from 1750 to 1777. In the middle of the roundabout there is a large column dedicated to him, built between 1917 and 1934 and created by Adães Bermudes, António Couto and Francisco Santos. A bronze statue of the Marquess is on the top, with a lion - symbol of power - by his side. The Marquis is shown looking towards the Baixa Pombalina, the area of Lisbon that was rebuilt under his direction after the disastrous 1755 Lisbon Earthquake.

The Blue and Yellow lines (Linha Azul and Linha Amarela) of the Lisbon Metro stop at Marquês de Pombal station, which was called Rotunda until March 1998. Eighteen bus lines operated by Carris also serve the square.
Image by GualdimG on Wikimedia under Creative Commons License.
Sight description based on wikipedia