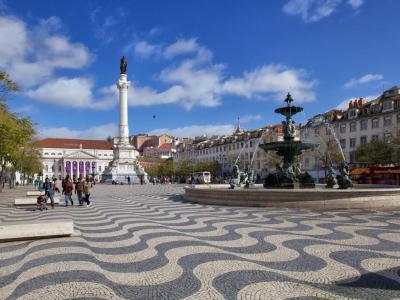 One of Lisbon's main squares since the middle ages, Rossio has been a popular meeting/strolling place for locals and visitors for centuries. It may not have many places to relax, but you could sit in one of its cafés all day long and not get bored. The place looks active always, but if you have time, visit at night: the fountains are lit, and the crowd can be a bit livelier, too.

The square itself is laid out in the beautiful wave-patterned Portuguese paving, "calçada portuguesa" (the paving style traditionally used in Portugal and many of its colonies), with two baroque fountains at the southern and northern edges and a column dedicated to Pedro IV, King of Portugal and first Emperor of Brazil. The square is actually officially called Praça de Dom Pedro IV, but this newer name never stuck and Lisboetas keep referring to it by the old "rossio" name, roughly equivalent to the English word "commons", or a commonly-owned terrain.

Tip:
On the square's northern edge is Lisbon's most important National Theatre, Donna Maria II, built in the neoclassical style on the place of the infamous Inquisition Palace destroyed in 1836. To the right of it, you'll find the historic Largo São Domingos, with its church, memorial to the Jewish victims of the 1506 massacre, several small joints selling 'ginjinha' (the local sweetish cherry liquor), and the other neighboring important square, Praça da Figueira. To the left of the theatre, you have the Rossio Train Station (be sure to check out the elaborate facade and striking horseshoe entry arches), the Hotel Avenida Palace, and Rua do Carmo, among other major sightseeing points. Finally, right behind the theater, is Rua das Portas de Santo Antão, a famous so-called "food street" with multiple cafés and restaurants.
Image by Sergey Ashmarin on Wikimedia under Creative Commons License.