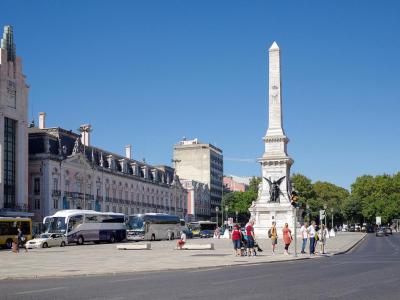 The elongated Restauradores Square lies at the southeast end of Avenida da Liberdade, near Rossio Square, and takes its name from the renewal of Portugal's independence in 1640, after 80 years of Spanish domination. Inaugurated in 1886, the obelisk in the middle carries the names and dates of the battles fought during the Portuguese Restoration War, along with statues symbolizing Independence and Victory.

The square has the signature patterned tiles that Lisbon is famous for, and is surrounded by 19th and early 20th century buildings, of which the most remarkable is Palácio Foz, the pink palace that once housed the Ministry of Propaganda under the Salazar regime (1932–74) but is now home to the Portuguese Tourist Office (where you can buy your Lisboa Card) and hosts free concerts open to the public in its Hall of Mirrors (check the official Facebook page for more information).

Also notable are the old Éden Cinema (now a hotel), with a beautiful Art Deco façade dating from the 1930s, as well as the former Condes Cinema, built in 1950 in Modernist style, which now hosts Lisbon's Hard Rock Cafe. Beyond that, the fountain is amazing and a lovely location for photography (yes, selfie-friendly).