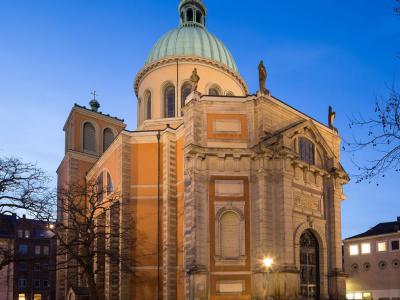 St. Clemen's Basilica is the mother church of the Catholic diocese of which Hannover is part. It is dedicated to Saint Clement of Rome.

Construction started in 1712, and finished in 1718. This was the first Roman Catholic church to be built in Hanover since the Reformation, when the Kingdom of Hanover became Protestant.

The church was almost totally destroyed during the Allied bombings in 1943 during World War II, as Hanover and other major cities were major targets for strategic bombing in an effort to cripple the Nazi regime. Reconstruction began in 1946, and the completed church was dedicated on 24 November 1957. On 12 March 1998, Pope John Paul II made the church a Minor Basilica.

It's easily distinguished from other buildings in the city due to its unusual shape. Built in Venetian baroque style, it is also often referred to as the "St. Peter of the North". Its services attract not just community members, but also many visitors to the city of Hannover from other parishes in the region and further afield.
Image Courtesy of Wikimedia and Christian A. Schröder (ChristianSchd).
Sight description based on Wikipedia.