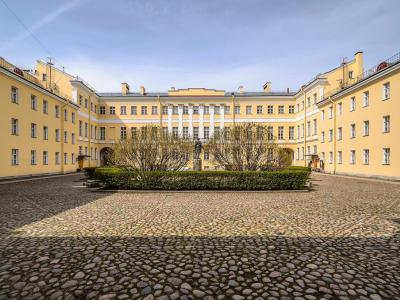 The National Pushkin Museum (aka the All-Russian Museum of Alexander Sergeevich Pushkin) at 12 Moika Embankment is the last home address of Alexander Pushkin where he spent the final four months of his life. Russia's #1 poet and his family lived here in a rented apartment from early September 1836 until a fatal duel on 27 January 1836 with Georges d'Anthès. The latter was challenged by Pushkin for attempting to seduce his wife, Natalia Pushkina.

After the poet's death, the house was rebuilt several times. The architectural appearance of the Pushkin apartment has also changed significantly. In the fall of 1924, the flat was taken over by the Pushkin circle of the Old Petersburg society who commenced its reconstruction which lasted several years. The very first museum comprising only several rooms opened in 1927 and then, significantly transformed for the 100th anniversary of the poet's death, reopened in February 1937. The museum took its current shape only in 1953, featuring over 200,000 artifacts, including memorabilia, books and works of art related to Pushkin.

Among the author’s personal items on display are his writing desk and much loved Voltaire's armchair, travel box and desk, walking sticks and a smoking pipe, an inkwell with a little arapie and many more. Other special exhibits include Pushkin's death mask, a lock of his hair, and the vest he was wearing on the day of the fight, plus the original sofa on which the poet died on 29 January 1837. In the room of the poet's wife you can find her portrait made by Alexander Brullov in 1832, her perfume bottle, coral bracelet, wallets embroidered with beads and silk, and other memorabilia.

Each year, the museum holds two memorials: the birthday of Pushkin and the anniversary of his death during which a moment of silence is observed at 2:45 pm, when Pushkin’s heart stopped beating.

Why You Should Visit:
Well worth a visit if you love literature and Russian literature in particular.

Tip:
A little dexterity might be needed to stay in front of or behind the groups of Russian schoolchildren, and be aware that you need to purchase an additional ticket to be allowed to use your camera/phone.