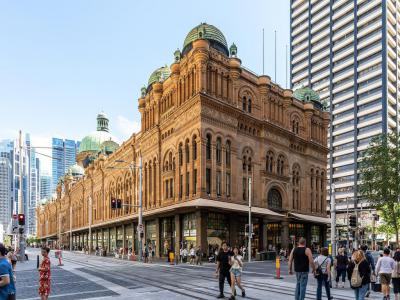 The Queen Victoria Building is a large shopping mall in the heart of Sydney. The hundred-year-old structure has been recently restored and its ornate façade and interior displays carefully preserved.

The QVB was designed by architect George McRae. The architectural style is Romanesque Revival and it was built with the purpose of providing employment to jobless skilled workers during a recession. The building was opened to the public in 1898 and named after the reigning British monarch, Queen Victoria. A statue of the queen greets visitors at the entrance. At the time of its inauguration, it contained cafes, showrooms and a concert hall. Later it housed the central library and government offices. Between 1984 and 1986, the Malaysian firm, Ipoh Garden Berhad leased the run down and neglected Queen Victoria Building and restored it to its former splendour.

A notable architectural feature is the large central dome with glass on the inside and copper on the outside. There are four floors and stained glass windows allow light into the interiors, patterned floor tiles and ornately wrought iron balustrades. Today, it has over 200 shops selling high-end products including fashion, jewelry and traditional Australian crafts.

Why You Should Visit:
The renovations are very respectful to the era of the original build and everything about this building oozes sophistication.
If not for the high-end boutiques, you can still enjoy a stroll through and marvel at the two beautiful clocks that still hang from the ceilings.
It's also lovely to sit on the 2nd or 3rd levels at one of the cafés looking out at the unique clocks.

Tip:
Sydney was built over tunnels and underneath the QVB are two levels of tunnels for additional shopping.
At night the building is beautifully illuminated, the shops are closed and you can wander through and gaze at ease.