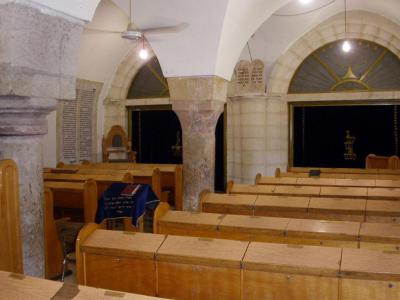 Lying directly adjacent to and on a lower level from the newly restored Hurva Synagogue, the Ramban Synagogue is considered the oldest active such house of worship in the Old City of Jerusalem. It was instituted by famous medieval scholar Nahmanides, who arrived in Jerusalem as a refugee from Spain in 1267 and inspired the return of a Jewish community to the city, after the Crusaders had murdered all the Jews therein in 1099, and denied them further access.

The synagogue was damaged in an earthquake in the 15th century and abandoned until being rediscovered in 1972, during the restoration, after 1967, of the Jewish Quarter, destroyed by the Jordanians during their occupation (1948-1967). Intriguingly, the house of worship was re-opened 700 years after its first restoration. Its entrance is to the left, by the olive tree, if facing the Hurva Synagogue from the square. One goes in through the stone gateway and descends the steps, and is politely received, except during the prayers; and please, modest dress (no tank tops, revealing clothing or shorts on either sex; covered heads for men), and no photography or cellulars on Shabbat. Entry is free!
Image Courtesy of Wikimedia and Ido Winter.