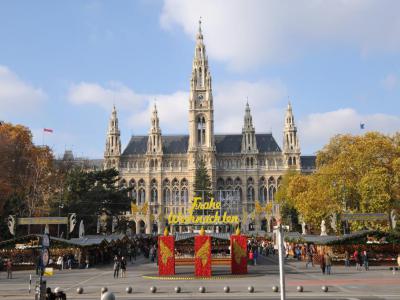 The Rathausplatz is a square, near the new Rathaus, after which it is named. Because of its size, its design and the architecture of the surrounding buildings it is one of the most important squares in central Vienna. The is used for public gatherings, such as the Christkindlmarkt (Christmas market) during the season. After the New Year, the square turns into an ice skating rink and, in the warm summer months, hosts film shows, concerts and festivals. Handicapped-accessible public restrooms make the area particularly user-friendly.

Surrounding the square is the Rathauspark -a large grassy areas planted with a multitude of trees and shrubs. Some of them are quite exotic, such as the Gingko biloba and umbrella trees. The network of paths cutting through the park offers a great opportunity for a bit of exercise before going to a concert in the evening or walking off some of the street vendors' foods.

Rathauspark is one of the most visited parks in the Austrian capital. Designed in 1863 as a public park, it has been actively in use ever since and much loved by the locals and visitors alike.
Image Courtesy of Wikimedia and böhringer friedrich.
Sight description based on Wikipedia.