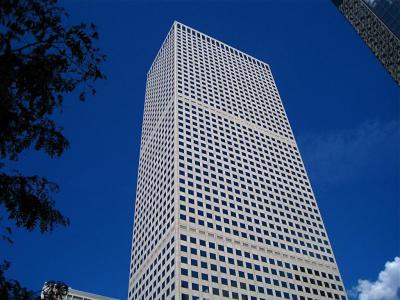 Republic Plaza rises 714 feet (218 m) and currently stands as the tallest building in Denver, the state of Colorado and the entire Rocky Mountain region. It was built in 1984, and contains 56 floors, the majority of which are used as office space. Republic Plaza currently stands as the 109th-tallest building in the United States. Designed by Skidmore, Owings & Merrill and built of reinforced concrete clad in Sardinian granite, Republic Plaza includes 1,200,000 square feet (111,000 m2) of office space and three retail levels containing shops, restaurants, and service businesses. The building has a three-story marble lobby that hosts a quarterly "Art in Public Places" program featuring Colorado and regional artists. On October 27, 2007, the building's top 20 stories were backlit in purple with giant white letters "C" and "R" to celebrate the Colorado Rockies' World Series debut.