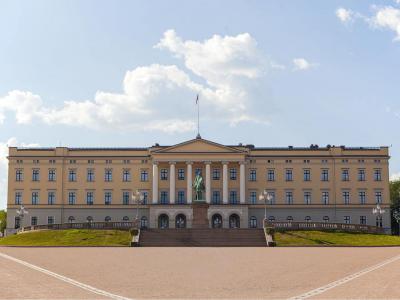 The Royal Palace or Slottet in Oslo was built in the first half of the 19th century as the Norwegian residence of the French-born King Charles III of Norway, who reigned as king of Norway and Sweden. The palace is the official residence of the current Norwegian monarch while the Crown Prince resides at Skaugum in Asker west of Oslo.

Construction began on the palace in 1825; it took almost twenty-five years to complete. The building process, overseen by local architect Hans Linstow, was fraught with political difficulties. The government refused further funding for the expensive project at one point, due to the king’s efforts to tie Sweden and Norway closer together. Despite proceeding with a simpler, three storey neo-Classical design, the palace was still unfinished when Charles III died in 1844. His son and heir, Oscar I, became the first resident five years later.

Since public tours began in 2002, the general public has been able to view and appreciate the renovation and splendor that the palace now boasts. The daily changing of the guards has become a popular tourist attraction in recent years. Additionally, in 2017, the former palace stables were renovated and converted into a multipurpose art venue which was named Dronning Sonja KunstStall. The building will be used as an art gallery, museum and concert hall and is also open to the public.

Guided tours run all afternoon through the summer months, though they are mostly in Norwegian. English language tours take place at 12pm, 2pm, 2:20pm and 4pm each day. Tickets for the guided tours are available online from 1 March each year.

Why You Should Visit:
Not a palace in the tradition of older European monarchies but still elegant and beautifully decorated with many of the objects you'd expect to see in a royal residence.

Tip:
Changing of the royal guards is at 1:30 pm daily. You can always politely approach one of the guard soldiers and take a nice photo or have a chat with them :)
The garden are peaceful and freely accessible – you can have a picnic over there and quietly sit down in the midst of nature.

Opening Hours (during Summer):
Mon-Thu: 11am-5pm; Fri: 12-5pm; Sat-Sun: 10am-5pm
Note that the 2018 season lasted from 23 June until 18 August.
Image by xdmag on Flickr under Creative Commons License.
Sight description based on wikipedia