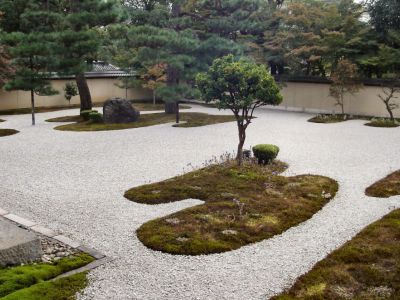 The Rozan-ji Temple is located to the East of the Imperial Palace in Kyoto on the site of a former mansion that belonged to the father of Murasaki Shikibu, a noblewoman who went down in history as the author of the epic 11th century novel, The Tale of Genji. Many visitors come here regularly to pay homage to Lady Murasaki.

The temple was constructed in the year 938 on a hill, called Funaokayama, by the Buddhist priest Ganzan Daishi. In 1571, many of the local temples were burned down by the warlord Oda Nobunaga. Unlike those unfortunate ones, the Rozan-ji temple escaped destruction. Emperor Kokaku commissioned its expansion and the work at its present site started soon after.

Today, Rozan-ji is the final resting place of numerous princes, princesses and other prominent personalities from the Edo period. Among them is Jocho Busshi, the renowned Heian-era sculptor, maker of Buddhist statuary. Fronting the temple is a small moss and gravel garden with beautiful bellflower plants. The Day of Setsubun, a traditional annual court ceremony of driving out demons, is performed here on the 2nd and 3rd of February.