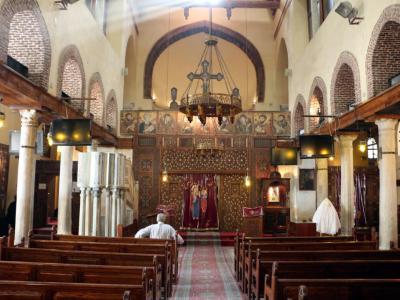 The Coptic Orthodox Church of St. Barbara is one of the many famous Coptic Orthodox parishes that can be found in the district of Coptic Cairo. The building is located on the eastern part of the Babylon Fortress and is one of the oldest buildings in Cairo, dating back to the 5th or 6th century AD. However, like many other buildings of Coptic architecture, it was rebuilt several times, most notably by the end of the 11th century.

The Church of St. Barbara is known for its many precious items. These items were sent to the nearby Coptic Museum, which is only a two-minute walk from the church. The basilican structure and tripartite sanctuary of the church closely resembles the one of Abu Serga (The Church of Saints Sergius and Bacchus). Nearby there is a convent which comprises several buildings, including a school built by the well known architect, Ramses Wissa Wassef.

While Saint Barbara's Church has been a long-lasting example of ancient Coptic architecture, it resembles the shape of ancient Basilicas. It comprises an entrance, a narthex, a long nave, several aisles and three sanctuaries. Like most other Coptic Orthodox churches that have more than one Sanctuary, the middle sanctuary is the one of main importance, dedicated to St. Barbara.
Image Courtesy of Wikimedia and Sailko.
Sight description based on Wikipedia.