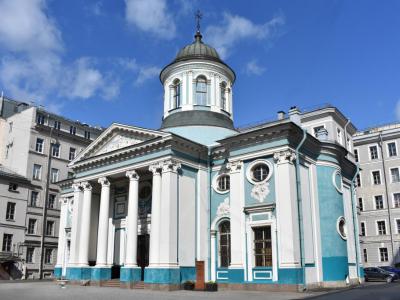 St. Catherine's Armenian Church on Nevsky Prospect is an Armenian Apostolic church and one of the earliest such temples in Russia, built in the 1770s.

Back in the mid-18th century, the site was occupied by private stables of Empress Elizabeth of Russia. On May 2, 1770 Empress Catherine the Great granted permission to the local Armenian community to raise a church, upon the request of her ethnic Armenian jeweler Ivan Lazarev. The project was funded primarily by Lazarev himself, who provided 30,000 rubles out of the total 33,000 needed. The design – an early example of Russian Classicism – was made by Yury Felten. The construction started in the spring of 1771 and was completed in 1776. The church was consecrated on February 18, 1780, and was named after Catherine of Alexandria, a namesake of the Russian Empress. Colored white and blue, it has a neoclassical portico and single cupola.

The church had soon become the center of Armenian cultural activity in the Russian imperial capital; the first Armenian publishing house in Russia functioned nearby. In 1865 the temple received permission to install bells. It was completely renovated by the Russian-Armenian architect Alexander Tamanian in 1906–09.

Under the Soviet rule, the church was closed down in May 1930. During the Second World War, the building served as the headquarters of anti-aircraft defense, and later, as a decoration room for the Leningrad Theater of Musical Comedy. The Armenian community regained ownership of the property in August 1992 and the first mass took place here in March 1993. After an extensive restoration, the church was reconsecrated on July 12, 2000 and was renovated again in 2014.
Image Courtesy of Wikimedia and Yerevantsi.
Sight description based on Wikipedia.