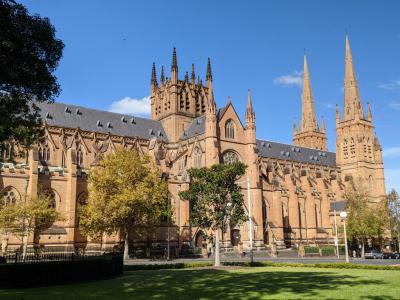 The mother church of Australian Catholicism, St. Mary’s Cathedral is the largest church in Australia. It is a functioning place of worship and an important landmark in Sydney.

The foundation stone of St. Mary’s Cathedral was laid in 1821 by Governor Macquarie and a simple structure was completed in 1835. The cathedral was destroyed by a fire in 1865. Father McEnroe, the then Archdeacon commissioned the building of the present structure designed by architect William Wardell and completed in 1882. The dedication mass was held by Archbishop Vaughan who also gave the first peal of bells. Work on the church continued after its dedication and improvements have been continually made to embellish the structure. It was given the title of a minor basilica by Pope Pius XI in 1930 and was the focus of World Youth Day in 2008 when it was visited by Pope Benedict XVI.

St Mary’s Cathedral’s exterior is clad with dressed Pyrmont stone and the architectural style is Gothic Revivalist. It has twin towers facing south and a cruciform design with a central tower where the nave and transepts meet. The interiors have windows with picturesque stained glass, intricate sculpture and a poignant monument to fallen soldiers.

Why You Should Visit:
The impressive flight of stairs leading up to the entrance and the two slender spires pointing to the sky make this elegant minor basilica amazing, chiefly when the walls glitter in gold light in the sunbeams.

Tip:
The best view of the Cathedral is probably from College street. Pick your visiting time carefully because of the regular services and the irregular but very frequent weddings. During the weddings, you can't walk in to see the Cathedral. Presumably on the weekend, you should have to have some other programs.