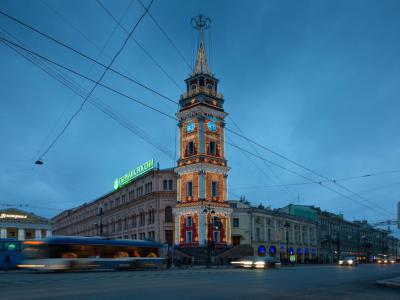 The Saint Petersburg City Duma was established as a municipal council in 1785 under the reign of Catherine the Great. The body was responsible for collecting local taxes spent on public needs: education, healthcare, etc.

The building itself was erected between 1784 and 1787 to a design by Giacomo Quarenghi. A stunning feature of it is the Italianate tower, added in 1799–1804, designed by Giacomo Ferrari. Visible from both ends of Nevsky Prospekt, the tower has a pentagonal shape and is very beautiful at night. From the 1850s to the 1920s, it was also used as a fire tower and an optical telegraph.

Over the years, the Duma building has endured numerous modifications. In 1847–52 the edifice was rebuilt in Neo-Renaissance style, favoured by Nicholas I – it was added with public halls and its overall height increased. Additionally, two more floors were constructed in 1913–14.

A spacious central hall of the City Duma was frequently used for high-profile social events. Among these were public lectures of the Free University in 1862, read by the likes of I. M. Sechenov and D. I. Mendeleev; concerts of the Russian Musical Society, founded by A. G. Rubinstein; and the first time public shows by composers like M. A. Balakirev, M. P. Mussorgsky, and N. A. Rimsky-Korsakov. Fyodor Dostoevsky, Alexander Blok, and Sergey Yesenin read their works here, too.

After the 1917 Revolution, the municipal government moved out and the building subsequently housed the Experimental Theater (1920s), the Academy of Consumer Cooperatives (1930s), a public catering college, and the Central Railway Ticket Office. In the years that followed, most of the historical interiors were lost, except for the relatively well-preserved Nikolaevsky and Mirror Halls that were occupied by the Children's Philharmonic.

Nowadays, the building houses the Rimsky-Korsakov Music School and, since 1998, a branch of Sberbank of Russia.
Image by Pavlikhin on Wikimedia under Creative Commons License.