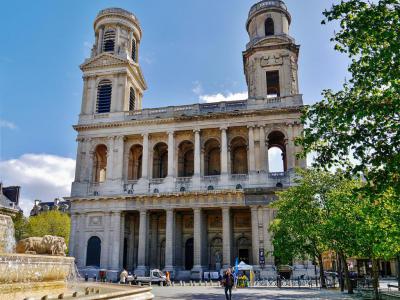 The Saint-Sulpice church is only slightly smaller than Notre-Dame and thus the 2nd largest church in Paris. Construction started in 1646, lasting 100 years until full completion. Today its grand architecture leaves one in awe. As a plus, the location is splendid with a beautiful square and a fountain outside, as well as the small winding lanes of St-Germain-des-Prés.

During the French Revolution, the church was badly damaged and converted into a “Temple of Victory.” Later, in the 19th century, it was fully restored and redecorated into a fine piece of architecture. During the day, sunlight pours inside the building through the large arched windows, revealing elegant columns that line the hall. A couple of enormous shells, resting on the rock-like bases, are present at either side of the front door. A fountain, displaying sculptures of four bishops of the Louis XIV era, stands in the church square.

The golden line, implanted in grey granite, which runs across the floor and bears graduated markings like a ruler, is a gnomon – a pagan astronomical device used as a sundial. The line was laid in 1727 by a clockmaker and astronomer in a bid to fix the date of Easter. Tourists, scientists, historians and pagans from around the world flock to the place just to see this now famous device.

Notably, in the movie "The Da Vinci Code", this is the church where the dreadful scary man came looking for The Grail and killed the pour wee custodian nun. It is also the church where Victor Hugo got married.

The Saint-Sulpice also houses one of the finest pipe organs in the world, with 6,500 pipes, 102 stops, and five layered keyboards. Even those who are not interested in organ music are amazed by the sheer size of the massive instrument reaching over 20 meters in height. If you have an ear for organ music, you should definitely attend this church on Sunday to hear one of its free weekly organ concerts.