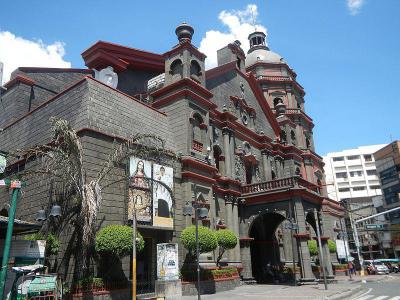 Inspite of several ups and downs, the Minor Basilica of San Lorenzo Ruiz, better known as the Binondo Church stands tall on the Ongpin street. The Church is named after Lorenzo Ruiz who served as a sacristan at the church and later became a missionary in Japan. He is well known as the world’s first Filipino saint. The architecture of the church shows evident features of both Philippine and Chinese styles. One of the Chinese features seen in the church is the octagonal shaped bell.

Originally built in 1596, the Church was in ruins in 1603 during Chinese revolt. In 1614, it was built again and renamed as Our Lady of the Most Holy Rosary. In 1762, the Church became a victim of the British bombardment and had to be reconstructed. It was destroyed yet again in 1863 due to the earthquake and was rebuilt. During the Second World War II, the Church was destroyed again and lay in ruins until it was finally rebuilt in 1984. Even after all this turmoil, the Church retains its external look whereas the interiors show modern architectural features. The paintings that have been put up at the altar and the light colored marble columns enhance the spacious interiors of the Church. The Mass is usually conducted in either Foolien or in Mandarin. This beautiful basilica famous for its religious importance and its history, is a common tourist location.
Image by Judgefloro on Wikimedia under Creative Commons License.