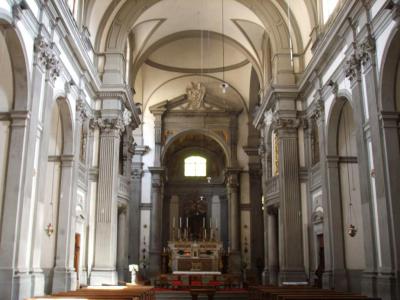 Dedicated to Saint Felicity – an early Roman martyr, this church ranks among the oldest in Florence, having possibly been founded in the 2nd century AD by Greek or Syrian merchants, the city's pioneers of Christianity. A new church was built in the 11th century and the current edifice dates from 1736–39, under design by Ferdinando Ruggieri, who turned it into a single-nave edifice.

Santa Felicita was on the path of the secret corridor that stretched from Palazzo Vecchio to Palazzo Pitti, the Medici family residence. The Medicis used to come here to attend mass from a high balcony at the back so they would not be seen by other people. However, the main reason for a visit of the interior is the amazing Italian Renaissance painting masterpiece, the "Deposition from the Cross" (1525–28) by Jacopo Pontormo, one of the early Florentine Renaissance masters in the same era as Michaelangelo.

Pontormo's picture here is highly unconventional: from the quasi-angelic creatures bearing Christ's body to the billows of gorgeously colored drapery that almost engulf the scene; many of the figures seem to be standing in mid-air rather than on solid ground; and there's no trace of the cross, the thieves, soldiers or any of the other scene-setting elements usual in paintings of this subject – the only contextual feature is a solitary ghostly cloud. The bearded, cloaked figure on the right (Nicodemus) is believed to be a self-portrait of the artist.