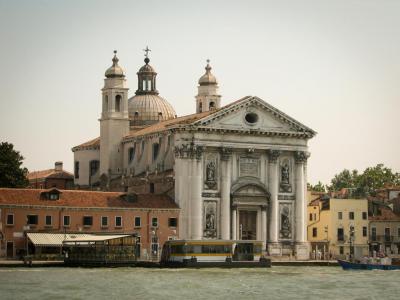 Záttere, a broad quay stretching along the Giudecca Canal, is one of Venice’s most popular promenades lined with numerous cafes, trattorias, and guest-houses. Back in the day, this was the place where most of the bulky cargoes coming into Venice were unloaded onto floating rafts, called záttere. Today, the quay is accessible either on foot or by vaporetto – Venetian public waterbus.

The first sight in the Záttere worth breaking a stride for is the Santa Maria del Rosario church, commonly known as Gesuati. Named so after the Jesuit order it was once part of, this church was later taken over by the Dominican order and rebuilt in the first half of the 18th century by Giorgio Massari, an architect who often worked with Giambattista Tiepolo. Ensued from their collaboration are the first altarpiece on the right and three ceiling panels depicting Scenes from the Life of St Dominic painted by Tiepolo, best viewed in the afternoon when they are particularly impressive. For visitors' convenience, there's a mirror on the floor allowing to study the figures, facial expressions, and clothing of the characters without having to crane one's neck. Visitors also take interest in the exploring of the tragically intense “Crucifixion” by Tintoretto, on the third altar, the oldest painting inside the church.

Further into the district there is another local landmark – Squero di San Trovaso, a small shipyard specialized in building and repairing gondolas. Operational since the 17th century, this is one of the few remaining workshops of this kind in Venice. Its main attraction, perhaps, is the small wooden house featuring a style unseen anywhere else in the city, typical of the Cadore region in the northern province of Belluno.

Tip:
This is one of about 20 churches that can be visited by purchasing the Chorus Pass available at any of the churches or online. The churches on the Chorus Pass, like the Santa Maria del Rosario, often hold wonderful works of art in their original setting.
The five bells of Santa Maria del Rosario's bell tower play together on Saturday at 5pm and have an impressive evocative sound.