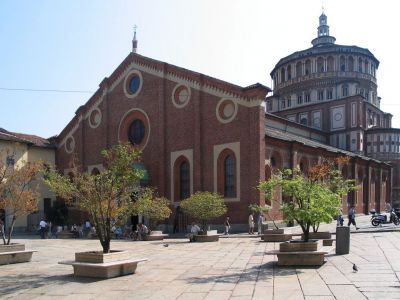 Santa Maria delle Grazie (the Church of Holy Mary of Grace) is a world-famous church and Dominican convent in Milan, included in the UNESCO World Heritage sites list. The Duke of Milan, Francesco I Sforza, ordered the building of Santa Maria delle Grazie in the 15th century. The design of its apse has been attributed to Donato Bramante, who at that time was in the service of the Duchy. While adhering to the overall Gothic style of the convent, he added some Romanesque touches as well.

The church is primarily famous for the mural of The Last Supper (Il Cenacolo Vinciano) found in the refectory of the convent. Created by Leonardo da Vinci for his patron Duke Ludovico Sforza and the Duchess, this 15th-century wall painting was made on a dry wall rather than on wet plaster, and, thus, is not truly a fresco. A fresco cannot be altered as the artist works; therefore, Leonardo decided to paint on the stone wall and then cover it with a sealing layer. The work began to deteriorate a few years after he had finished it. Two early copies of "The Last Supper", thought to be the work of Leonardo's assistant, still exist.

During World War II, on the night of 15 August 1943, an allied aerial bombardment hit the church and the convent. Much of the refectory was destroyed, but some walls survived, including the one holding "The Last Supper", which had been sand-bagged for protection. The preservation works continuously done ever since, and hopefully in the future, are believed to maintain this painting intact for many centuries to come.

Why You Should Visit:
Viewing "The Last Supper" in its own setting will make you feel more appreciative of the single point linear perspective and the 3D effect so cleverly used by Da Vinci.

Tip:
To view "The Last Supper", make sure to book your tickets well in advance on the official website, as they are usually sold out within at least two weeks prior to the sought date.