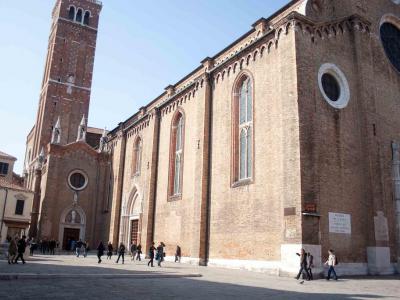 After Basilica di San Marco, this is probably the second most notable church worth visiting in Venice. Located slightly off the beaten path in a charming area with a great deal of character, the Frari church is rarely, if ever, assailed by visitors. Though the building itself is quite extraordinary and is a true monument to the Venetian history and art combined.

Founded by the Franciscan order in the late 13th century, this gargantuan edifice is one of Venice’s largest, and its brick bell tower is the 2nd tallest after the San Marco's. It is also one of the three Venetian churches to retain Gothic appearance – rather plain on the outside, including the facade. Contrary to its misleadingly dull “mountain of brick” type of exterior, the interior is quite astounding.

Few buildings in Venice can boast multiple first-rate works by Titian, especially the likes of the “Assumption” painting, unprecedented at the time, soaring over the high altar. Another Titian's masterpiece here is “Madonna di Ca' Pésaro” – equally innovative in the displacement of the figure of the Virgin Mary from the center of the picture.

Alongside these and other paintings by Vivarini and Bellini, the church is also home to the wooden statue of St John the Baptist by Donatello, the beautiful 15th-century choir, and the wealth of extravagant tombs. On the right-hand side of the nave stands a 19th-century monument to Titian, marking his grave. The artist died in 1576, aged nearly 90, from a plague. Such high was his esteem, that Titian was the only plague victim to be allowed a church burial during the outbreak. On the opposite side, there's a marble pyramid – mausoleum of sculptor Antonio Canova erected by his students, and a rather controversial, if not say grotesque, tomb of Doge Giovanni Pésaro – the monumental composition supported by gigantic Moors and featuring, among other figures, some decomposing bodies.

To learn more about these and other artworks within the church, feel free to grab a guidebook or a free pamphlet by the ticket office as an aid.