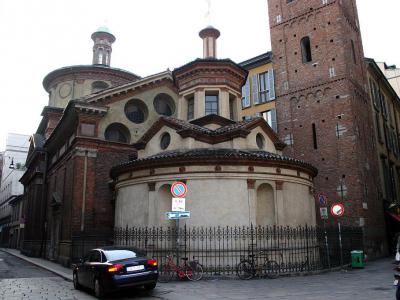 The church sits on the site of a primitive place of worship built by the archbishop Anspertus in 879, dedicated to Saint Satyrus, confessor and brother of Saints Ambrose and Marcellina. The current edifice was erected between 1472 and 1482, commissioned by Duchess Bona di Savoia and Duke Gian Galeazzo Sforza who wanted a huge temple although the available location was very small due to the presence of the busy Via Falcone behind. Many famous architects designing churches in those days had to deal with the extreme shortage of space.

In order to solve this problem, Bramante devised an ingenious solution by painting an optical illusion to compensate the choir truncated to an awkwardly small depth of only 90 cm (3.0 ft), and thus realized one of the first examples of trompe-l'œil in the history of art. Though architectural optical illusion was popular in the late Renaissance and Baroque, Bramante gave it an entirely new dimension. If you stand at the entrance, you will have an impression of a much deeper space of the altar, extending far behind than it is physically possible. Special lighting inside the church was used to help create this effect. The magic, however, quickly disappears when you step aside from the main axis of the church, and reappears again when you step back.

Why You Should Visit:
There aren't many places like this in Milan: small, half-hidden, and ready to reveal themselves only to those who know how to discover them.
Entry is free and photos are allowed, so you can easily have a look at the views of its interior. The perspective effect at the end is simply stunning.

Tip:
As in other churches in town, volunteers will offer you a short explanation about the history and art of the building, so be sure to take advantage.