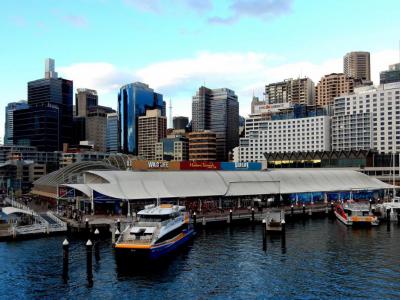 Opened in 1988, the Sydney Aquarium located on the eastern part of Darling Harbour is one of the largest in the world. More than a million people visit every year to view the diverse variety of Australian aquatic creatures showcased at the aquarium.

The Sydney Aquarium was designed to look like a wave. The inauguration was part of the bicentennial celebrations of the city. New innovative exhibitions were added after the opening and today, the display consists of over 650 species including 6000 individual fish and other marine and freshwater creatures from the rivers and seas of Australia.

The aquarium is divided into several exhibit areas including the Southern Rivers, the Northern Rivers, the Mermaid Lagoon, the Southern Ocean and the Northern Ocean. Visitors can view exhibits through a series of transparent underwater acrylic tunnels. They can see the unique species of fish and other animals swimming alongside or over their heads. Notable species at the aquarium are a platypus, Dugongs, Penguins, the Saltwater Crocodile and a recreation of the Great Barrier Reef. Besides being a major tourist attraction the Sydney Aquarium is also a research facility where tagging of sea turtles is performed and the effects of chemical contamination of water on aquatic life are studied.

Why You Should Visit:
A wonderful walk-through experience with many different sea life displays and varied viewing experiences!

Tip:
Pre-book your visit tickets online if possible; not only are discounts available you will also minimize or avoid queueing (which can be lengthy at peak times).
Aquarium inclusion in one of many Harbour ferry and tour packages is also common and definitely worth considering.