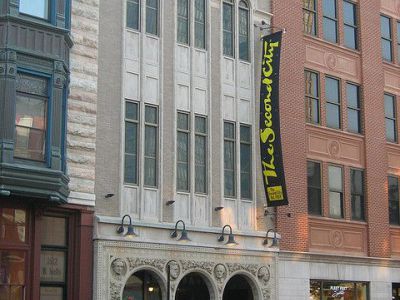 Old Town's biggest claim to fame, this comedy club is known for first-class acts who made it to the big screen: names like Mike Myers, Bill Murray, John Belushi and Tina Fey grace the foyer of fame.

Culturally relevant and hilarious, the place is usually packed and generates a good atmosphere, though one should definitely be prepared for a fair amount of profanity and left-leaning political content. Some parts contain a little bit of audience-participation improvisation; in fact, the third and final act (going around 10:30pm) is just that and no ticket is necessary to attend as the cast tries out new comedy material. Seats are otherwise considered first-come, first-served, so be sure to get in 20-30mins prior if you want the full show, or spend some extra to reserve seats on the rail.

Note that besides the Second City Theater, the complex also houses the Black Orchid Supper Club, a Sony Multiplex, as well as restaurants and a Starbucks. The theater's mainstage entrance features stone arches with faces originally from the Adler and Sullivan-designed Garrick Theater.

Tip:
To visit one of Chicago's favorite dive spots, head to the OLD TOWN ALE HOUSE (Mon-Fri: 3pm–4am; Sat: 12pm–5am; Sun: 12pm–4am) known mainly for its proximity to Second City and the cast's inclination to hang out there after shows. The interior resembles a pub from decades past and is decorated with random paintings. It's packed on weekends, and loud, but that's what makes it so fun.